— A copy of the game was provided, courtesy of Ubisoft —

First of all, I have to admit: even though I tried most of the Far Cry games, I never finished any of them. So, when I heard that we are getting a direct sequel to the previous one (Far Cry 5), which ended in a nuclear blast, it made me wonder what kind of trippy voyage Ubisoft will make us take this time around. Being a fan of post-apocalyptic game like Fallout, Mad Max and the like, I wanted to see a Far Cry spin on this kind of environment. Did I enjoy the experience? Yes, I did, and I will go back to Hope County, even after the credits roll.

Far Cry: A story of radiation

The story takes place 17 years after the end of Far Cry 5, which ended in a nuclear blast. To escape the radiations, people lived in bunkers, not unlike what we see in the Fallout franchise.  After that many years, people started to emerge from those bunkers, wanting to see what the world now looks like and rebuild all they’ve lost. Everything was looking bright, until a group called the Highwaymen, led by The Twins (Mickey and Lou), started to wreak havoc. They want control of this newly rebuild society for their own goods.

You play as the “Captain”, a character that is a part of a specialized rescue team, responsible for helping groups of survivors that are trying to resist the Highwaymen. Of course, one mission near Hope County goes south, and the story turns for the worst. There are returning characters from the previous game (which I’m not going to name, to stay spoiler-free). You will meet a wacky mix of NPCs and allies. The typical shenanigans, full of explosions, wild animals, and killing sprees are just a part of what is going on this type around.

Guns for Hire: a wacky mix of allies

One of the fun gameplay mechanics that was present in Far Cry 5 is back in this iteration: Guns for Hire. There is a roster of characters available to you, from which you can choose from, one at a time. You start with Carmina (seen in the previous picture) and unlock the others by playing a specific side-mission available in the game. Six humans and two animals are part of this list, with each having their specialties. By using them, after a certain number of kills, they can get special perks or upgrades, which make them even more valuable. Experimenting with each one is one of the fun aspects of the game.

This time around, many RPG elements constitute the backbone of the gameplay. Crafting is an important aspect of the gameplay loop. Hope County is your home base, which you upgrade by obtaining ethanol. This material can be obtained by finding supply crates in the wild, stealing some from the Highwaymen, or liberating outposts. Once liberated, those locations can be scavenged. It consists of giving them back to the enemy, which makes them raise levels. By doing so, they become more difficult to liberate, but the reward in ethanol gets better. It is a very fun activity, which is necessary to do if you want to maximize your chances of survival.  You also have other RPG elements like perks (or special abilities), which are unlocked by accomplishing certain things during your playtime.

An upgraded home base also allows the player to craft more powerful weapons, have more health (for you and your allies), among other things. Certain abilities like fast travel, having a map of certain resources, and crafting disposable ammunition and explosives are just a couple of the extra benefits for taking care of your people. 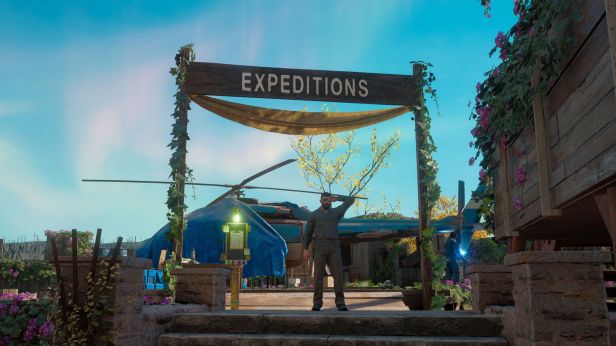 Expeditions: a novelty worth trying

A new kind of optional side quests is also present in the game: expeditions. It consists of being transported by helicopter to a special location, outside of the world map, where you have to go deep in an enemy territory to get a supply crate, then escape (so your transporter can pick you up and leave). The reward consists of material necessary to craft powerful weapons. I need to give a special mention to the character that is in charge of those expeditions: Roger Cadoret. He is one of the funniest NPC I have ever encountered in a video game. He is a typical representation of the French-speaking person from Québec who tries to speak English, and his expressions are priceless. For a bilingual person like me, I laughed hard many times hearing him talk.

The beauty of Mother Nature

Ubisoft has taken the map of Far Cry 5 and took pleasure in modifying it, creating a world where Mother Nature just took over. The colors are lush and vibrant, the sky looks great, with a lot of aurora borealis, even during the day. Everything feels alive, making a simple activity like walking in the forest pleasant and full of surprises. The animals are vicious and really keep you on your toes at all time. When you think you reach a little group of Highwaymen and realize they are being attacked by a pack of wild boars, it adds action to a game that is already full of it. Even if I was playing on a regular PS4, the graphics are really of a triple-A quality, keeping the studio’s standards real high. 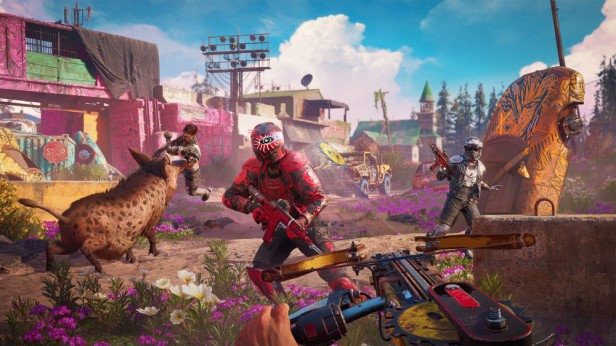 A satisfying experience, if you take the time for it

Finishing the game took me about 18 hours. Advancing through the story was never a boring experience, because I took the time to explore. There are treasure hunts that allows you to find even more crafting elements. I already liberated a lot of outposts before reaching the final battles. The only time I felt like I was underpowered was when the confrontation with the Twins exploded (the second-to-last battle). I had to withdraw from the mission, go back to the world map and level up my base, weapons and health. Even if it was a little annoying, it took me only about 2 hours of grinding to be able to reach a level of power I felt confident with. Fortunately, the tasks to do were fun, so it never became a chore. Afterwards, finishing the story was easier, and the conclusion of the story satisfied me. I was happy with what I experienced.

A voyage worth taking

Far Cry New Dawn is not a game that revolutionizes open-world games, and it didn’t need to do so. It is a fun experience, full of action and surprises. There is a lot of content to explore, especially if you’re planning on getting all of the trophies/achievements. The fact that the game is only $40 US/$50 CAN is also a pleasant surprise. If you want something a little different from the big games that were released recently, look towards this Ubisoft Montreal title, and I don’t think you will be disappointed.